The debate was last night in Nevada, and it was full of zingers, one-liners and shots across the bow. It was also important because we are past Iowa and New Hampshire, just before Super Tuesday, and the field is down to a manageable half dozen onstage participants. Andrew Yang is out for good, Mike Bloomberg made the stage for the first time, and Tom Steyer and Tulsi Gabbard were on the sidelines.

A lot has changed since our analysis of the Democratic candidate websites in the fall. Most candidates have faded, some stuck around longer than expected and one with deep pockets put his hat in the ring.

This time, we are looking at their Facebook strategies and normalizing analytics — relative to follower counts — for comparative parity. The time frame we are reviewing is approximately 90 days between November 17, 2019 and February 20, 2020, which begins right before Mike Bloomberg officially joined the race on November 24, 2019.

Before digging into the details, there are a couple of things you should keep in the back of your mind. Quintly did a great study, looking at usage of Facebook’s reactions (e.g., like, love, angry, etc.). This study compares the candidate campaigns to each other, but it is also good to see how they stack up to overall benchmarks. A longitudinal study throughout 2018 reviewed 94,000 profiles and 105 million posts, which we will reference throughout the post.

What Is Being Posted?

First, take a look at what each candidate is posting. On Facebook, you have content types: status, link, video or photo. Keep the following statistics in mind when reviewing the chart below and reading the rest of this piece.

The above is probably not surprising, but it makes you question why we post links or status updates ever. Remember that Facebook is a closed network, and they want you to stay on their site to engage with content, so the algorithm is going to surface videos and photos more often, while status updates seem banal, and links are less often bubbling up because a click takes a user off of Facebook.

It is interesting to note that a significant number of Donald Trump’s posts are status updates, and less than half of his posts are videos or photos.

By now, most people understand that follower count is a vanity metric. It looks great to say you have millions of followers, but if they are not engaged, then what is the point? But, as an anchor for our subsequent analyses, it is a good place to understand the scale at which these candidates are operating.

There is also nothing surprising here about the numbers, with the current president having far more followers than the others, having gone through a campaign in 2016. And, it is not surprising that Bernie Sanders is second with a fair bit more than his rival Elizabeth Warren, having gone through the 2016 Democratic primaries himself.

Mike Bloomberg’s follower count is a respectable 873K after joining the race in November and throwing tens of millions of dollars into advertising.

Social engagement is a far more important number, as it demonstrates the rate at which individuals are consuming, interacting with, or sharing your content.

Engagement on Facebook is comprised of three activities on a post: comments, shares or reactions. These are in decreasing order of level of effort required. It takes more time to comment on a post than share one; sharing takes more time than liking or reacting to a post. The numbers below represent the total overall engagements divided by the total followers.

It comes as no surprise now that, probably because of a low follower count, Mike Bloomberg has a substantially higher overall engagement rate. We assume this is driven by his campaign’s massive advertising budget.

For that matter, it demonstrates that Facebook really is a pay-to-play walled garden where driving significant engagement requires a financial investment.

Both Bloomberg and Warren seem to have strangely low engagement rates at just over one per follower. It is really interesting to look at these numbers relative to the previous 90-day period.

Bloomberg began throwing tons of money into driving engagement after his November announcement, and he saw a three-fold increase. It also means his page had anemic engagement before he jumped into the race.

Both Amy Klobuchar and Pete Buttigieg are seeing momentum in public opinion polls after Iowa and New Hampshire. That might explain their increased Facebook follower engagement.

What seems strange is the significant drop in Bernie Sanders’ Facebook engagement. That one is puzzling given his current status as front-runner.

The graph below shows the breakdown of engagement types by candidate.

This is an interesting one, seeing that Bernie supporters share his content substantially more than the other groups. What compels someone to share instead of just like? Research shows that it is heavily driven by the desire to define our individual personas or provide information so we seem valuable to others.

Maybe we can assume that Sanders’ supporters deeply believe in his message and want others to do so as well? Or they’re circulating content within an echo chamber to validate themselves.

Liking something or reacting with an emoji is kind of the definition of slacktivism. Does that mean Pete Buttigieg’s supporters are the slacktivists and Mike Bloomberg’s are not? Probably not, but one potential theory is based on demographics.

A recent Quinnipiac poll found that Bloomberg’s base of supporters is made of voters aged 50 and up who make over $50,000 a year. So, people who are not digital natives. But, Buttigieg actually polls two times higher than Bloomberg with the 60 and up crowd, so that shoots down that theory.

Bernie Sanders polls highest among the 18 to 29 cohort, and he has one of the lowest reaction engagement rates. Instead of a generational explanation, maybe this is passion driven. After all, his supporters are the ones least likely to donate to another candidate.

Before breaking down each reaction type, look at the chart below which shows that the majority of reactions are likes. Amy Klobuchar is near the top of the pack here with nearly 83% of her supporters’ reactions being likes. Could this be “Minnesota nice” — something that actually has its own Wikipedia page — at play for the home senator? Allegedly, some former staff claim she is quite the opposite.

What is up with Elizabeth Warren’s supporters, the only candidate under 70% for likes. Are they just grumpy?

Love: Feel the Bern is Feeling the Love What stands out here are the top two of Sanders and Buttigieg. They’re both significantly higher than the rest of the pack. With a score of nearly twice as much as the bottom, I would look to the passionate fervor with which they are known to support their candidates. Sure, all camps have a high degree of passion for their candidates, but something stands out with the “Feel the Bern” and “Boot Edge Edge” crowds. These candidates are rarely funny. And, they really should not be, because they’re running for president. The average “haha” reaction according to the Quintly study was 7% and Biden leads the group with about half that. And Mayor Pete is seriously unfunny with less than a percent. The Quintly study average was a 2% sad reaction rate. Elizabeth Warren’s campaign is posting content that gets more than twice that reaction. Judging from above, her supporters are not liking her posts, and they think the content being posted is sad — at a rate twice that of the benchmark.

Also, let us not skip over the fact that Donald Trump supporters reacted with a sad emoji less than half of the benchmark. 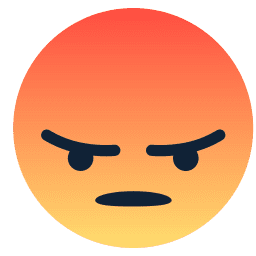 The Quintly benchmark for an angry reaction was 2%. Elizabeth Warren supporters are at 13%. Wow, that is a huge six-fold difference. What accounts for that?

Also interesting to note that Trump supporters and “Minnesota nice” Klobuchar supporters are half as angry as the benchmark.

Facebook engagement levels do not vary that widely depending on the day. The most consistent was Klobuchar who had a 4.4% higher engagement level on her busiest day, Wednesday, than on Saturday. Biden had the biggest gap of 8.8%, with his audience engaging nearly twice as much on Thursday than Sunday.

It looks like Tuesday is the day to post a campaign video, though interestingly, Sanders posts most of his videos on Sunday.

Photos are big on Mondays for the campaigns, though the outlier here is Bloomberg with his focus on Sunday posts.

What dominates this chart is the overwhelming number of status posts by Donald Trump relative to the crowd. He posts at least five times as often as the others.

The candidates are sharing links fairly evenly across the work week. Reviewed some of the content, it is typically an article with favorable coverage of their campaign or issue, or an appeal for donations.

One big new face on the stage is a HUGE spender on Facebook, by a factor of a lot. In fact, Mike Bloomberg is spending nearly five times the second place primary candidate, Bernie Sanders with $44 million to $9 million. And, he is even substantially outspending Donald Trump by $12 million after just joining the race a few months ago.

Again, the premise of this study is a normalized comparison to assess campaigns with vastly different follower counts. So, the big budgets for Bloomberg and Trump are important to note, but seeing how that breaks down per engagement is key.

Below is how much each candidate is spending per engagement.

The data we had access to does not differentiate between paid or organic engagement. Suffice it to say, Bloomberg’s per engagement spend is really high compared to all other candidates.

The last item, and something we did not rank the candidates on, was the number of Facebook page managers they had associated with their accounts. Not that this denotes any level of sophistication or caliber of strategies, but it is interesting. Take a look below at how many people are managing the respective Facebook profiles for each candidate.

Now remember these numbers indicate nothing really of importance, other than that is the maximum number of people who have access to the candidate’s Facebook page and have the ability to post content. Still, interesting nonetheless.